COPS have launched a major sex and bullying probe at a military school linked to Dunblane killer Thomas Hamilton.

Four teachers have been suspended at the posh MoD-run Queen Victoria School in Dunblane, Perthshire.  English lecturer James McNally and computing head John Lawrence are accused of having "inappropriate relationships" with female pupils.

It is the latest of many scandals to hit the boarding school, which was also connected to gun nut Hamilton. LINK

He organised camping trips for pupils there before going on the rampage at Dunblane Primary in 1996 and killing 16 children and a teacher.

Last night a source said: "The school has been dogged by claims of institutional bullying and sexual misconduct for years." LINK

It has emerged that Central Scotland Police have been called out TWICE this year after receiving complaints.  Following the visits, McNally and Lawrence were suspended.

The source added: "Complaints have been made that they had 'inappropriate relationships' with girl pupils."

Smith and MacDougal were earlier suspended following an inspection at the school - set up in 1908 to teach sons of Scots servicemen - by education chiefs.

The insider said: "They were sent home following personality clashes with other members of staff.  There appeared to be issues with other colleagues.  Some people might call it bullying.   This only came out following an HM inspection towards last year."

The scandal also follows allegations in November 2003 that boys were sexually abused at the school which has the Duke of Edinburgh as its patron. LINK

The claims came from a former housemaster who said pupils were regularly preyed on by a vice ring of toffs.

The perverts - some of them major establishment names - allegedly picked up their victims in limos before dropping them off in a distressed state the next day.

But it was claimed the military code at the 270-pupil school meant the students kept quiet about their ordeal.

The full horror emerged when some of the victims broke down and told the housemaster their sickening tales of sustained sexual abuse. LINK

Angry politicians have regularly called for an investigation into the school, whose pupils have also been rapped for drinking, assault and bullying.  In January 2000, boarders were expelled after being caught having sex in a dormitory.

Five pupils were booted out and a sixth was suspended.  Three mixed couples, aged 16 and 17, were involved in three separate incidents over three weeks.

On another occasion, two 17-year old boys were escorted back from a trip to Brisbane, Australia, after they broke a strict curfew and stayed out all night.

And two girls were sent home from a Duke of Edinburgh Award trip to Fort William, Inverness-shire, after disrupting fellow campers and stealing condoms.

In March 1998, a 14-year-old pupil was caught selling cut-price alcohol to teachers after smuggling spirits into the school.

And another boy of 14 was expelled after he stabbed a fellow pupil in the leg.

Police also launched an inquiry into claims that a girl had been sexually assaulted by three pupils.

In the current scandal, one of the girls involved in the inappropriate relationship claims is aged 18, the other is 17.

Last night, a spokesman for the school said: "There are ongoing investigations into alleged incidents at the school.  These are being conducted internally by the school.  Another matter has been referred to the police and it is a matter for them."  The MoD admitted four teachers had been suspended.

A spokeswoman said: "We can confirm that - following an inspection by HM Inspectorate of Education towards the end of last year - two members from the school were suspended from duties and are currently subject to an internal disciplinary investigation.

"We can also confirm that following a Central Scotland Police investigation a further two teachers have been suspended from the school."

She added: "The MoD has zero tolerance of inappropriate behaviour or misconduct in any of its departments." LINK

Enquiries are still ongoing and a report has been sent to the fiscal."

[Ed ~ As patron of QVS, and having been made aware of the physical and sexual abuse of pupils there, why did Prince Philip not:

I can think of only one reason.  What about you?] 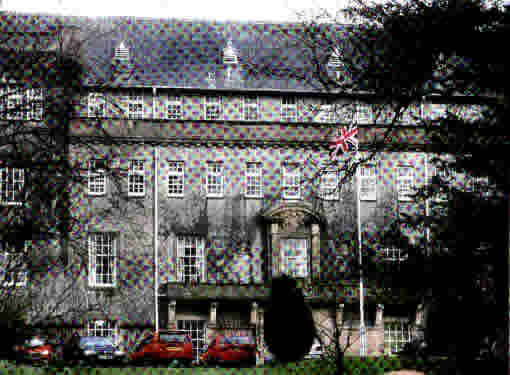 Teachers face cop
probe on sex and bullying
Infamous ... fee-paying Queen Victoria School in Perthshire has been rocked by scandals and is now at the centre of a probe