[Ed ~ This statement by James Douglas-Hamilton LINK was more than four months after evidence was given to the contrary LINK  So, on which planet was he living?  What stake did he and Government Ministers - such as Malcolm Rifkind - have in making such ludicrous claims?  Who were they trying to protect?  As Defence Secretary from 10 April 1992 to 5 July 1995, Malcolm Rifkind had primary responsibility for the safety and welfare of the kids physically and sexually abused at Queen Victoria School (QVS). LINK]
THERE had not been enough evidence to prosecute Dunblane killer Thomas Hamilton for indecency before the massacre, the Government declared last night. LINK

Hamilton killed 16 primary school children and their teacher at the school gym in Dunblane on 13 March this year.

The Government also stated last night that it would not be investigating the actions of the police or the Procurator Fiscal over the possible prosecutions of Hamilton before the killings.

The inquiry into the tragedy, led by Lord Cullen, heard concerns about Hamilton's activities when he was running boys' clubs in the town. LINK

The Scottish Office minister, Lord James Douglas-Hamilton said in a written Commons reply that there had not been enough evidence to prosecute Hamilton for acts of indecency from his time as a boys' club leader. LINK

He said there had been no evidence under the so-called Moorov Doctrine in Scottlish law LINK, which allows the reports from several witnesses to be used as corroborating evidence of each other. LINK  [Ed ~ Contemptible liar!  There were numerous reports and complaints about Hamilton that were ignored.]

Lord James said: "There was in fact very little evidence of any acts of indecency on the part of Thomas Hamilton. LINK  So far as can be established no incident amounting to sexual interference with male children was reported to the police while Hamilton was alive. LINK

In answer to another question, Lord James said that the actions of the police in reporting cases to the Procurator Fiscal were examined by Lord Cullen, who concluded that there was no evidence of any criminal act on Hamilton's part before the tragedy.

[Ed ~ Lord James Douglas-Hamilton is a member of the same secretive and highly suspect, Masonic Speculative Society of Edinburgh as Lord Cullen, numbered at  1772 LINK and 1702 LINK respectively. They are therefore "brothers" of Thomas Hamilton with an oath to "defend a brother's character in his absence as in his presence", the fifth of the Five Points of Fellowship - the strongest oath of brotherhood. LINK] 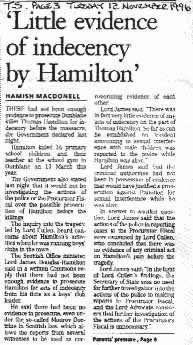